We wanted to go into Tokyo at least one more day, so we picked Tuesday. The weather forecast only said there was a 100% chance of thunderstorms that day so no biggie. We had left the umbrellas on the train the last time we went not Tokyo, so you might say we were going commando. Or at the very least tempting fate.

The train ride in was rough because of train rerouting so we stood the entire time. And when we got into Asakusa, it was pouring rain.
One of the many things I love about Japan that is different from DC or Montreal (the only other cities where I’ve extensively used subways) are the awesome shops tied to the train stations. And Asakusa was no different. So we walked through the store attached to the subway station and looked for umbrellas.
The cheapest one we found was $60. Most expensive was well over $100.
So we left the store and station and ran across a small alley and found a hole in the wall shop that had tiny umbrellas for $6. All I wanted it to do was keep my hair and glasses dry. It did exactly that, and neglected my arms and my purse. No matter.
Our first stop was Sensoji Temple. It’s a tad surreal for a couple of reasons. First, it’s beautiful, and the gardens are peaceful, but you don’t have to walk far to be back in the chaos of Tokyo. Second, it’s a prime shopping district. 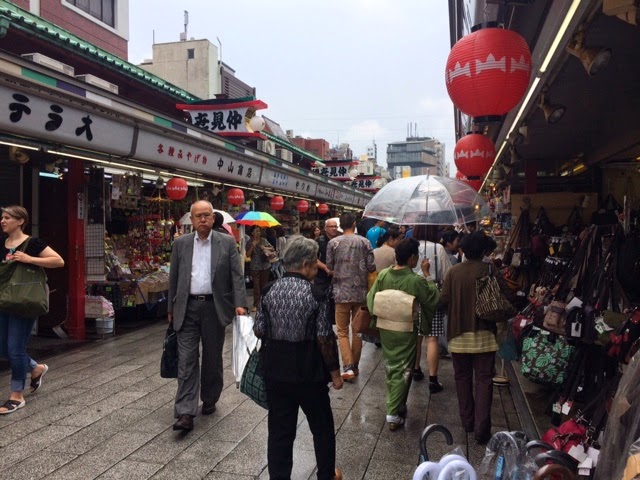 This is the main drag of shopping at the temple. Because I am so short and did not have a ladder to stand on, as I saw another photographer use, this is an incredibly limited view of the shops. It’s a good 1/4 mile minimum of everything from shoes to handbags to treats and toys. 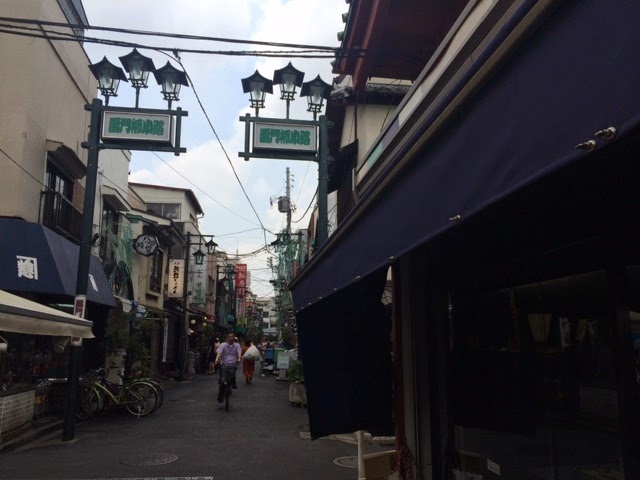 This is a side stree that runs perpendicular to the main drag. One of several. And in spite of the rain, the place was packed. So much so, that I really hate all the pics I took. Like this one: 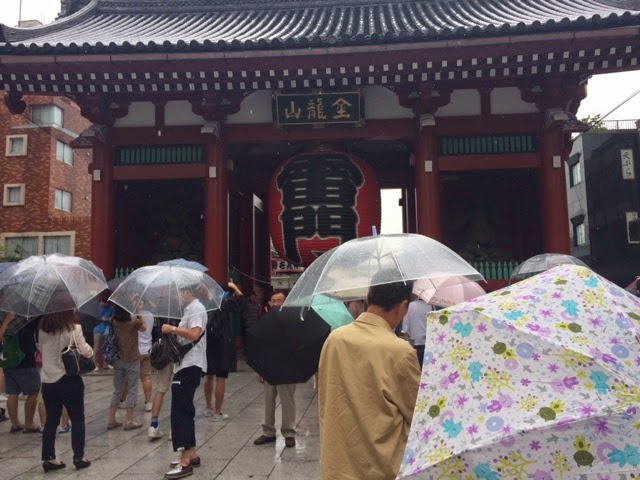 What is that? That is me trying to take a photo of the entrance to the temple whilst holding an umbrella and trying not to be a nuisance tourist to others around me. I will use it as an example of bad photography in my photojournalism class. That’s right, I pretend to teach photojournalism. Please judge me plenty. 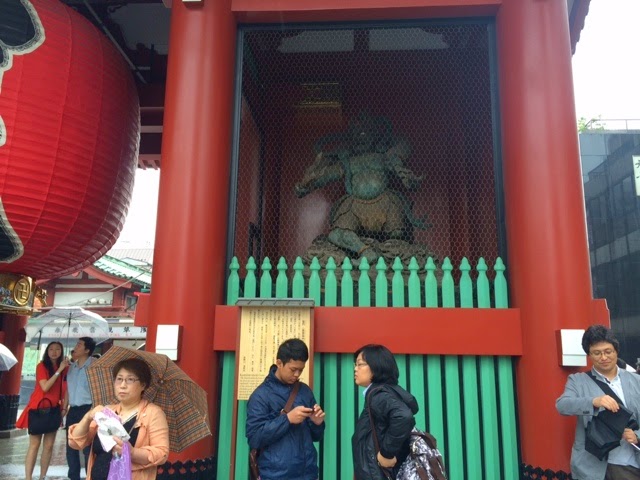 Another horrible photo, this one of the dogs guarding the temple. 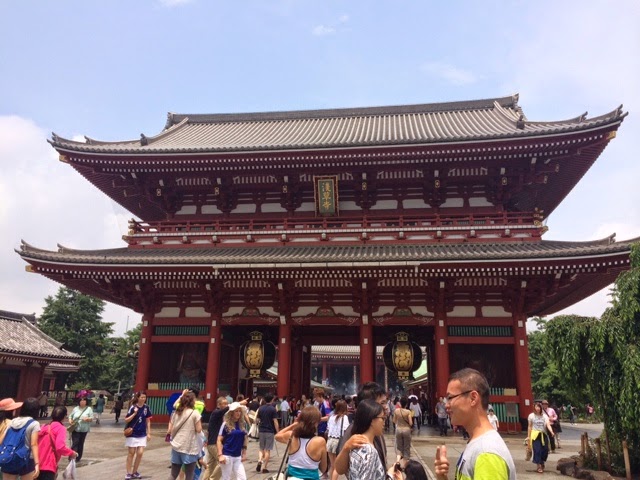 This one is a little better. This is a pagoda on the temple grounds. 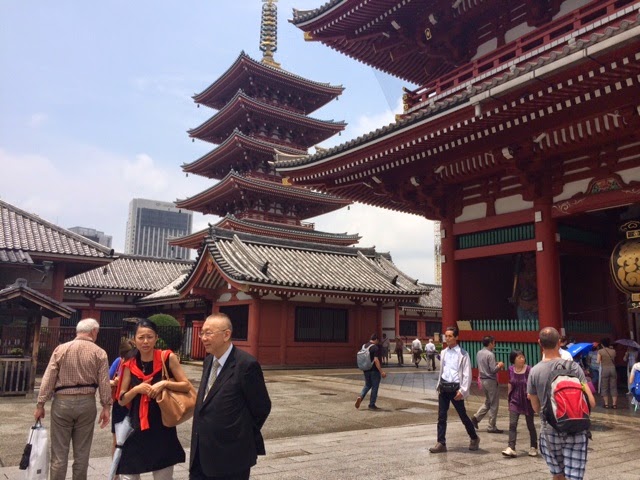 One of the assignments I’ll be giving my students next year is to take a photo of the same thing from a different vantage point. Here’s kind of an example of that. 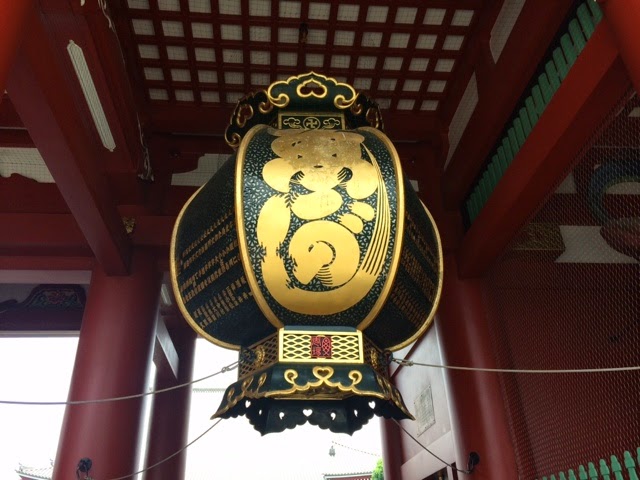 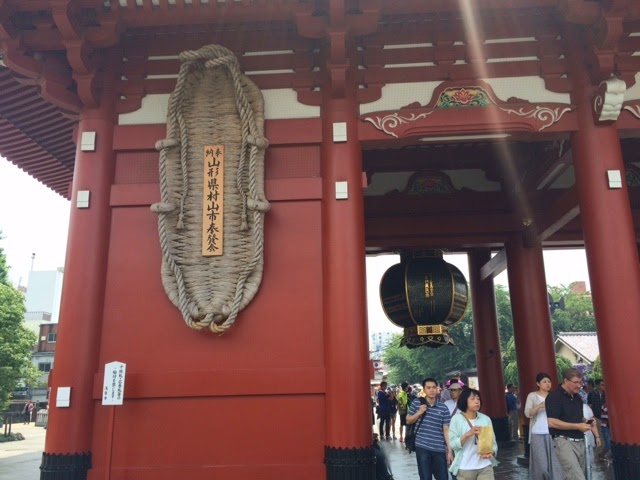 And a giant sandal. 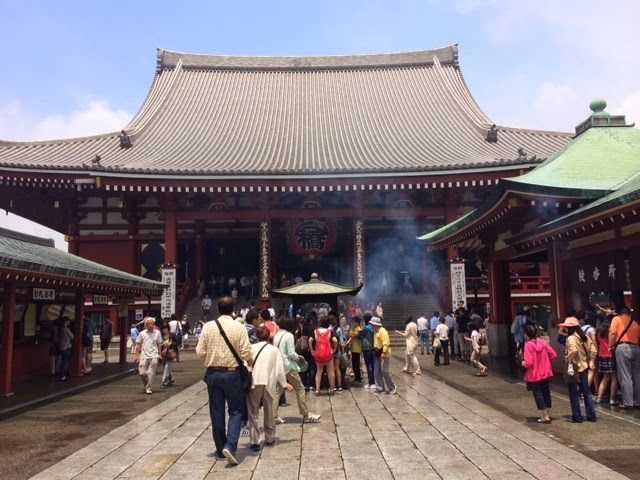 And this is the walkway that directly leads to the actual temple. The smoke there is from incense that people burn as part of their worship. 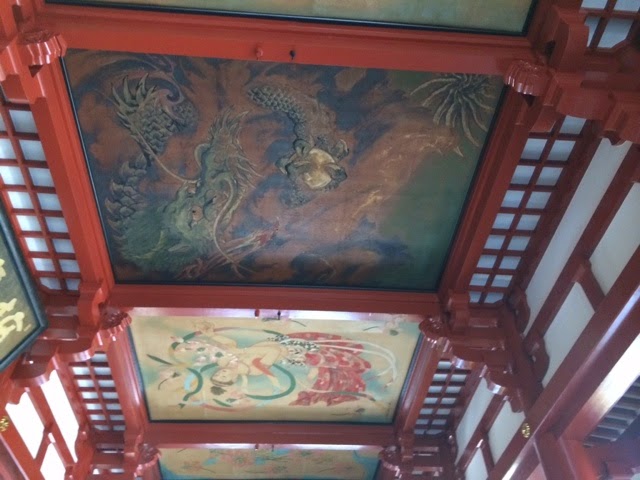 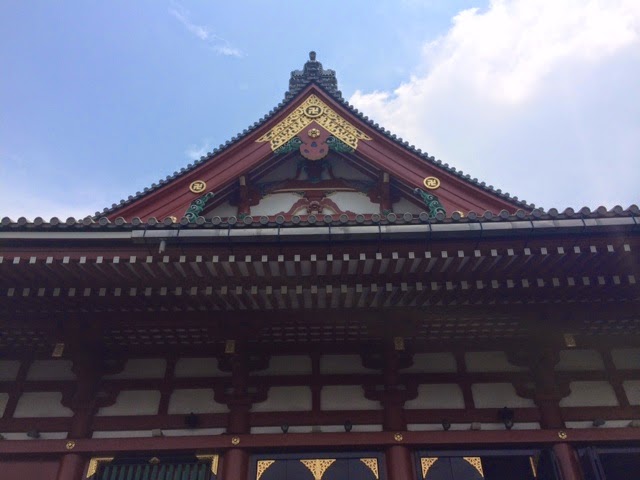 The top of the temple. A shot that I will use to show my students the importance of aligning your shot prior to taking the photo. Seriously, now that I’m looking through these photos I’m a little horrified. 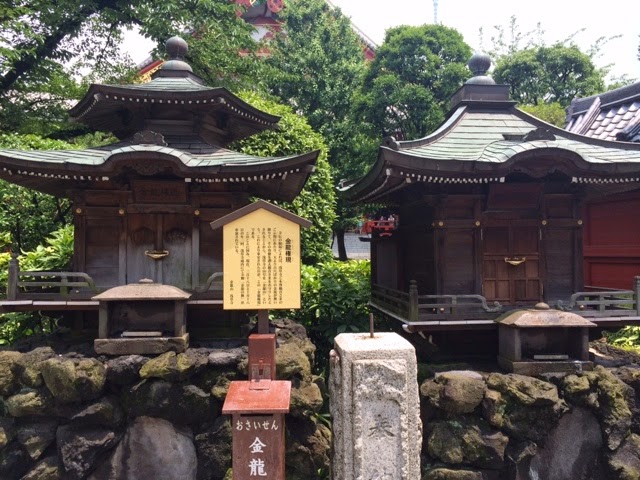 We walked around the gardens. These are two small pagodas. 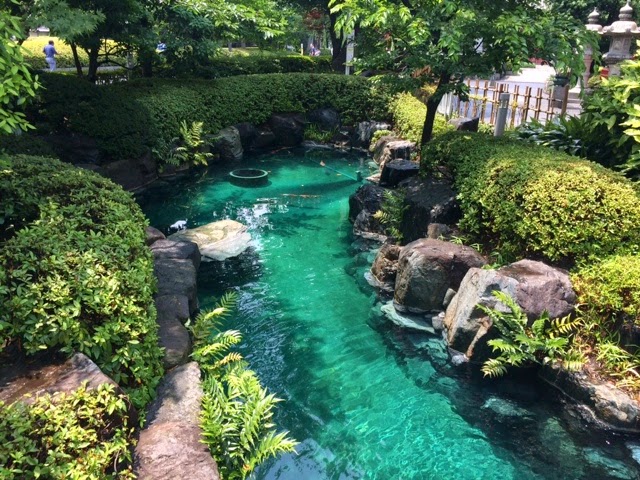 And a koi pond. The fish were shy that day. Very peaceful part of the park though. 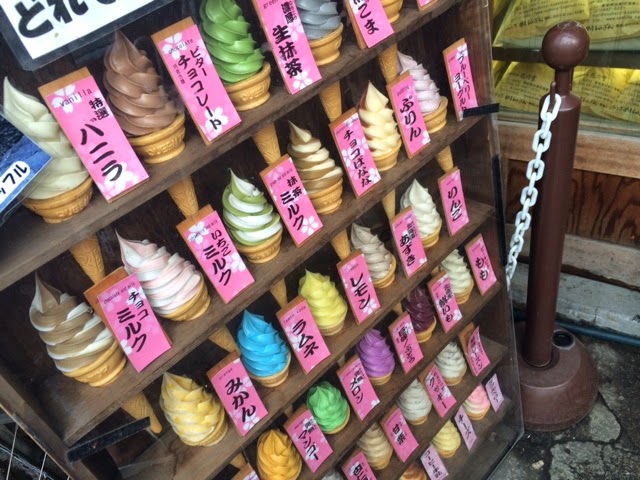 I love the food displays in Japan. This is one at the temple–a small eatery that always has a line. They sell shave ice, ice cream, and Japanese sweet bread. The sweet bread was amazing. Some of these ice cream favors were interesting: rose, bean, pudding, and chestnut were some of the flavors I was not tempted to try.
After we left the temple, we went up to the red bridge. 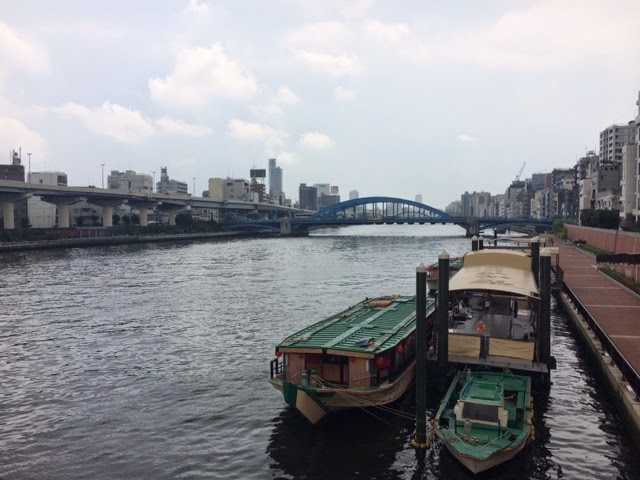 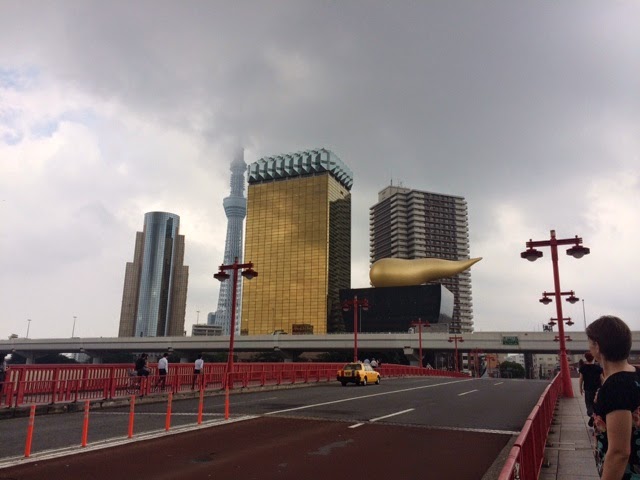 The Tokyo Tower is the building that looks like a lightsaber. The clouds were low that day so you can’t see the top. Next to it is what some people call the Golden Turd. It’s supposed to be a drop of beer or something like that, as the giant gold building is the office for the largest beverage company in Japan. 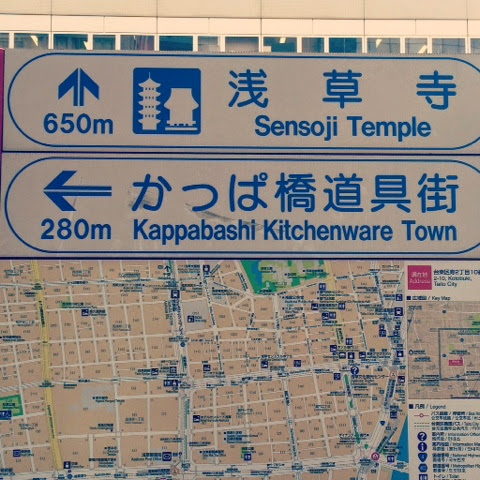 After we had some lunch at a Turkish kebab place, we headed to Kappabashi Street. This is probably the best photo I took all day. 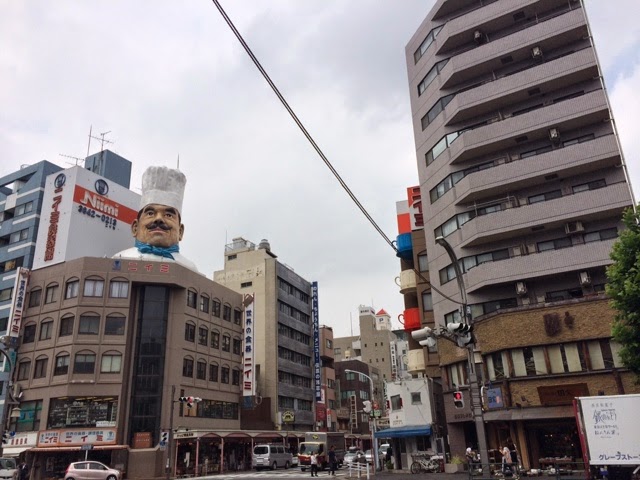 The entrance to the kitchen district. Luckily, it stopped raining while we were at the temple. This street is home to many shops for restaurants and bakers. I didn’t take a lot of photos because I feel weird taking photos in stores. But I did take this one: 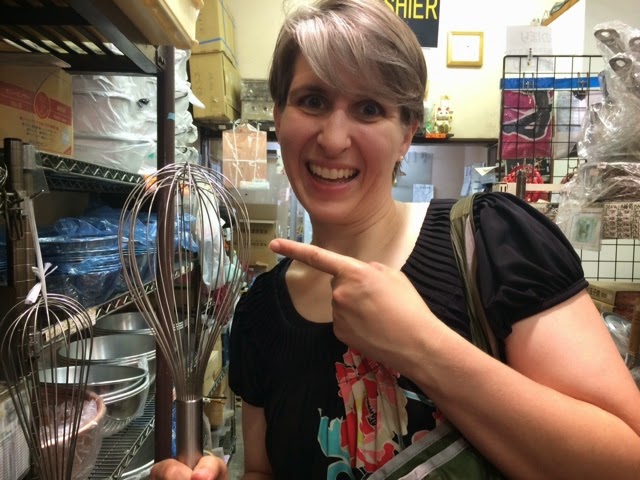 Look at the size of that whisk!!!!
I saw so many items I would’ve loved to purchase if I lived in-country, but since I don’t, I settled for a bento–a Japanese lunch box. 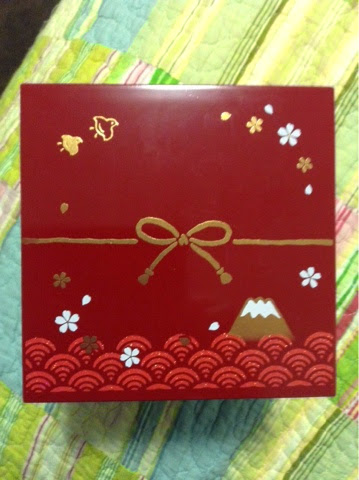 I didn’t last long, walking up and down this street. I’m not a big shopper in the first place, and standing for the whole train ride in took a heavy toll on my feet. So we moseyed back to the subway and headed home. We took a train that made more stops than we would’ve liked, but we were able to sit the entire 75 minutes back to where we parked. So that was pretty awesome.
I know I could’ve spent so much more time in Tokyo, but it really is overwhelming. I loved that we split up the trips and explored just little pieces of the city instead of trying to cram in absolutely everything.
I only have a few days left, and I’m getting incredibly sad.