I went to Memphis over the weekend to present here. Our presentation went rather well, and we received some really great feedback, which is the whole point of presenting at a conference. But we did a little sightseeing the day before we presented…

This is for my sisters, who sang “Walkin in Memphis” to me incessantly over the past several weeks.

I walked on Johnny Cash.

Elvis is cyrogenically preserved, a la Han Solo, in several places in the city: 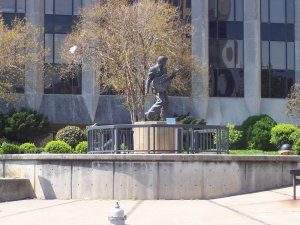 This is how flooded the Mississippi is right now…a tree grows in the river:

The Mississippi as the sun goes down: 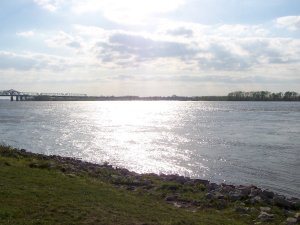 We went to a Memphis Redbirds game. Guess who owns half of Memphis?

Good advice for most situations:

Highlights of the baseball game:
**Every time someone walked, they played “Walkin’ In Memphis.”
**When they switched out pitchers, the organist played “Stand By Your Man,” followed by “Stay” (The Frankie Valli one).
**The organist also played an amazing rendition of “Funkytown” and “Rehab.” It was awesome.

It was an okay trip. I wish I could have eaten out more–we only had barbecue once, but it was sooooo yummy.