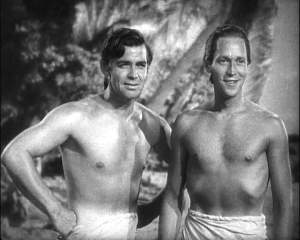 Plot: A film version somewhat based on historical events in which part of the crew of the HMS Bounty decide to mutiny, casting adrift British vice-admiral William Bligh with those who were loyal to him. Bligh was known for being tyrannical, and the ship’s lieutnant, Fletcher Christian, loses his ability to defend Bligh’s harsh treatment of the hired hands who actually sail the ship and starts the mutiny. The film covers what I’m guessing is close to five years of time, from the voyage to Tahiti and back to England, as well as the court martial for the mutinous men. Spoiler alert: Fletcher Christian evades Bligh and never sees England again, and therefore never has to face his court martial.

Best Moment: The speech given by Roger Byam after being court martialed. During the mutiny, Byam was essentially taken prisoner by Christian, despite the two being good friends. Because he didn’t do more to resist the mutiny, Bligh omits key details from his testimony to ensure Byam is found guilty. Once Byam faces his conviction, he explains that while mutiny is never a solution, Bligh was not innocent.

Worst Moment: Bligh’s treatment of the men on his ship is truly heinous. His character is the definition of absolute power corrupting absolutely.

Fun Facts: I had seen the 1962 remake of this film, starring Marlon Brando, and much of what I wrote in 2005 applies to this 1935 version. It truly is a masterclass of how not to be a leader.

It won the Academy Award for Best Picture, and three of the actors in the film were nominated for Best Actor. As a result, the next year the Academy created the category “Best Supporting Actor.”

Epiphany: After Christian takes the Bounty, he heads back to Tahiti. Once there, he tells the men they are staying. Some of the men have families in England, but Christian knows if he goes back, he is dead. Eventually they have to leave Tahiti to evade a British ship, so they sail until he feels it is safe to land somewhere they won’t be found. None of the sailors with him have a choice–they are subject to Christian’s whims.

So my question is this: is Fletcher Christian really any better than Bligh? A benevolent dictator is still a dictator.

Recommendation: If you like movies about sailing, see it. Some of the shots on the ship are pretty cool. But I can take or leave this one. I’m not sorry I saw it, but I probably won’t watch it again.