After a good night’s sleep, we piled in the car again and drove an hour north to the Agate Fossil Beds. I chose this national park because it said it had paved trails, which I figured the 7 year old could manage better than tall grasses. One small problem though: 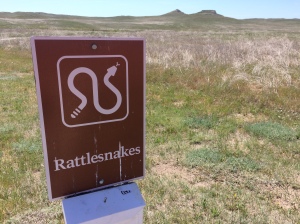 And true, I could’ve told them that we probably wouldn’t see any snakes and if we made noise they would stay away, but I must admit, I was also a bit freaked at the prospect of running into one of those creatures. Maybe I’ve seen Raiders of the Lost Ark one too many times.

So we walked up to a bridge and back, but did not make it up to the hills you see in the distance behind that rattlesnake warning.

The best part about this national park was Ranger Anne. The National Park Service has this great Junior Ranger program, which engages kids through a variety of activities at the park. Once the activities are completed, the rangers have the kids recite a pledge to protect the national parks, and they are awarded with a badge. Ranger Anne added a line to the end of the pledge, though: “And I promise I will not put a baby bison in the back of my car.”

Emma still can’t look at a camera. But she conquered her fear of rattlesnakes and stepped inside the tipi.

These two also weren’t afraid of potential snakes in the tipi.

The nieces after an hour of tooling around the park. This was as close as we got to the fossil beds.

We headed back to Scottsbluff for lunch, but made a pit stop at the Black Sheep Wool Company, where we saw no sheep, but lots of yarn. And this–which I have never seen before:

Apparently this is a thing! Little Free Library!

We ate lunch at Chili’s, where I realized Lauren had eaten chicken fingers for every meal but breakfast since leaving Omaha. Not having kids of my own, I didn’t realize this is actually rather normal behavior for kids her age. Usually my rule is that we don’t eat at chain restaurants when out of town, but between my FODMAP drama and Emma and Lauren’s pickiness, we needed to stick to places we could trust.

I promised them pool time, if the pool was fixed. It was, so they played around in a hotel pool that was the rough equivalent of a king-size mattress. Have hotel pools always been this small and I’m just now realizing it?

After some pool time, we headed up to Scottsbluff National Monument. Lauren and McKenna tell me on the drive up that the bluffs got here because Nebraska used to be an ocean. An ocean? I ask. They affirm. Yes, an ocean. I am not sure I believe them, but I’m a teacher and who knows what kids are learning in elementary school these days.

We drive up to the top of the bluffs, and I see a sign for a 1/2 mile hike. We head in that direction, and then a couple who had just returned from that hike tell us a rattlesnake had camped out in the middle of the trail. So my grand plan to take my nieces on any hike at all never materialized. But we did get some good photos, albeit with my iPhone, because I left the fancy camera in the hotel room. The fancy camera and I did not have a good couple of days. 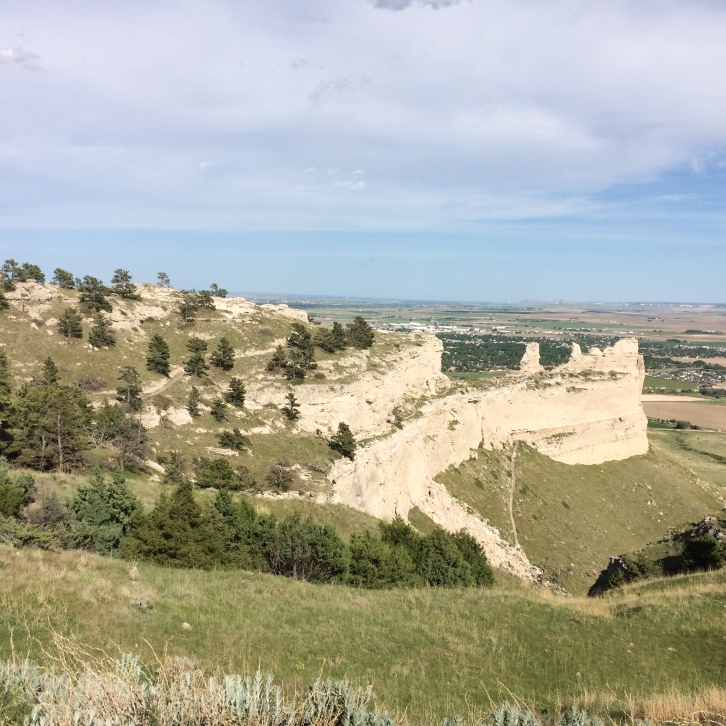 We headed back down to the visitor’s center so we could watch the film about Scott’s Bluff, and wouldn’t you know–2 minutes into the film we hear that the bluffs are remnants of an ancient sea! Look at my smart nieces.

Emma picked up two more badges–one for Scott’s Bluff, and one for the centennial celebration of the National Park Service. Like I said, smart nieces.

Sporting badges for her hard work.

Incidentally, how Scott’s Bluff got its name is really quite morbid. Ah, history. You fun.

We got back to the hotel around 7, popped in A Bug’s Life (we had seen so many bugs that day and thought that film would be an excellent choice), followed by Enchanted, and our trip was over.

We drove back to Omaha the next day, an uneventful but long drive back home.

I have a lot of friends and acquaintances who have driven across Nebraska, and they complain about the terrain on their drive. They aren’t wrong–the landscape along I-80 isn’t appealing. But on this trip, I was reminded of how gorgeous most states are if you take the time to get off the proverbial beaten path. Nebraska did not disappoint in that regard. Not 10 miles after we headed north off I-80 were we greeted by lush, green, rolling hills.

This was an excellent test run for a trip with my nieces–perhaps next summer we will go explore a different section of northern Nebraska.

One that doesn’t have rattlesnakes.