Because on Monday, I planned to blog every day this week, acknowledging all the help I received in publishing my book, but my calendar is trying to convince me it’s actually Thursday and I haven’t blogged since.

Yes, I included an acknowledgment section at the end of my book, so people are thanked there, but I have to expand a little on one of those thank-yous.

Mr. AE Stueve, author extraordinaire, probably did not realize he would take on multiple roles when he suggested four years ago that I write a book.

He became an advocate, taking my book to EAB and proposing they publish it.

He became an editor, reading I don’t even know how many drafts of the book and giving me valuable feedback.

He became a cheerleader/therapist, reassuring me in the middle of epic freak-outs over so, so, so many issues (big and small) that accompany writing and publishing a book.

And most important, he became a friend. We had just started working in the same classroom mere months before NaNoWriMo 2011, when I wrote the first draft of “Lies Jane Austen Told Me.” We kind of knew each other prior, but working in the same classroom, advising journalism students, and shepherding my book the past four years, he’s become a trusted friend. I admire his dedication to his wife and family, to his writing, to his students, and to his friends. 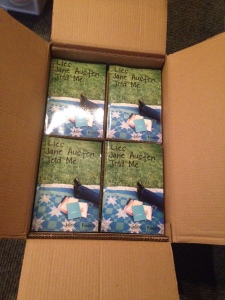 There is no way this book exists without his involvement. And regardless of how the book is received, the fringe benefit of having Stueve in my corner is beyond worth it.