I have two significant disorders, diseases, whatever you want to call them. One is hypoglycemia, which I was diagnosed with in college. If I don’t eat every three hours or so, any manner of events can happen, ranging in severity from basic irrational behavior to passing out. The other is IBS, which my doctor told me three years ago I “probably” have it since she couldn’t figure out any other reason why I was getting sick every time I ate. I tracked which foods made me sickest and quit eating those and for the most part, I’m okay. But occasionally, I eat something that never bothered me and suddenly, I’m violently ill.

The IBS worried me the most, coming to Japan, because some of the food would be completely new to me. But at the same time, I wasn’t going to eat chicken fingers and French fries the whole time.
This morning, I woke up at 6 am and felt completely nauseous. I planned on going to the gym, since I’ll have to face my trainer eventually and he’ll be disappointed enough as it is, but my stomach begged me to go back to bed. I shoved half an apple and a piece of bread down and went to the gym anyway, my stomach still upset. I wasn’t sure why–a quick mental check told me I didn’t really eat any of my trigger foods the day before. And I was nervous because after we got home from the gym, we were planning on having conveyer belt sushi for lunch. 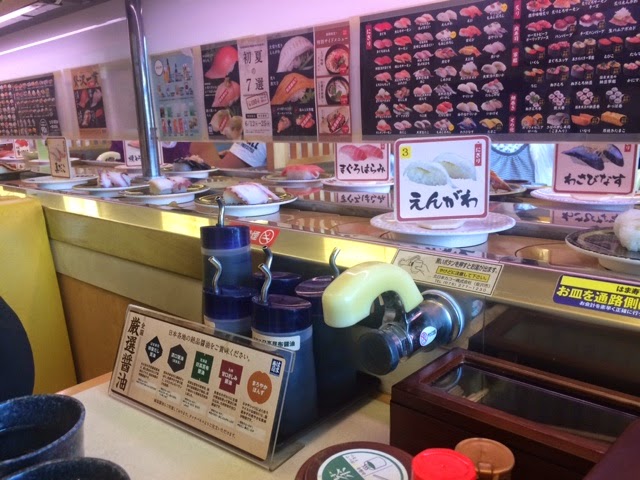 Deanne asked if I wanted to hold off, but my time here is winding down so I said we press on. 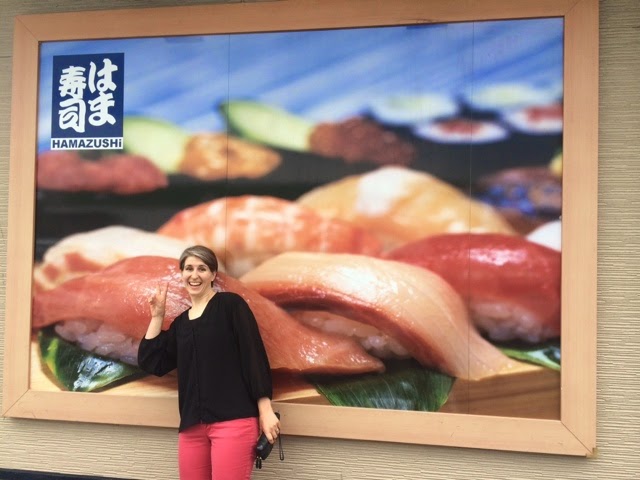 So here’s how it works: you sit at a booth or at a bar-like configuration, and different kinds of sushi and other foods come by. You take what you want, unless it is on a raised red platter–those platters mean someone ordered the food thereupon and you are not to take it. When your meal is finished, you touch a button on a screen at your table, and a waiter comes by, counts up your plates, and prints a bill for your party.
It’s pretty slick.
I wanted to be as adventurous as I could stand to be, because prior to today, I’d pretty much stuck with “safe” sushi. 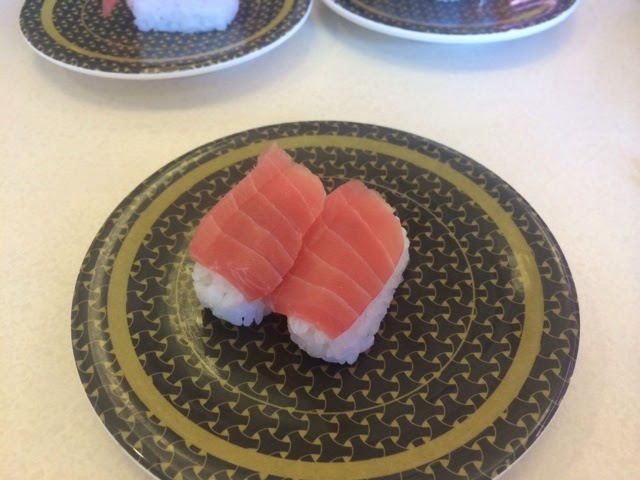 This, for example, was not “safe” in my previous paradigm. But you know, when in Rome and all that crap. And my stomach was still upset, but I figured this couldn’t possibly make it any worse. (It was quite tasty.) 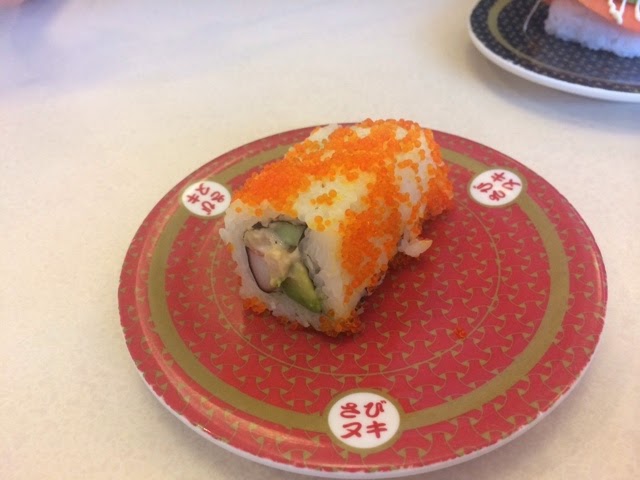 What are those orange things, you ask? Fish eggs. They are crunchy. And this roll? Amazing. Avocado, crab, cucumber, and mayonnaise. The mayo seems to be what they use instead of cream cheese. But it’s not typical mayo–it is closer to horseradish. 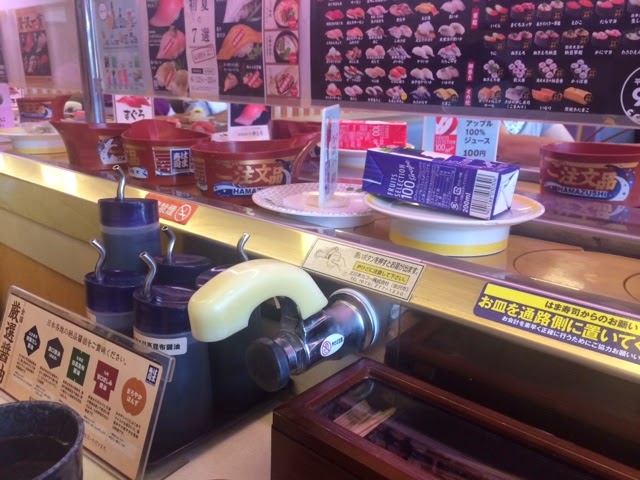 Juice box? Help yourself. See the empty red containers? Those are the platters that hold the specially ordered food. 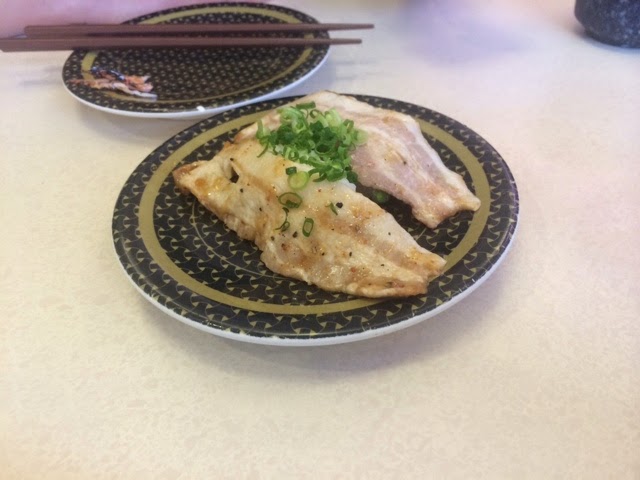 Bacon sushi. I couldn’t pick it up with the chopsticks, but Deanne said it was delicious. This was not my fave. 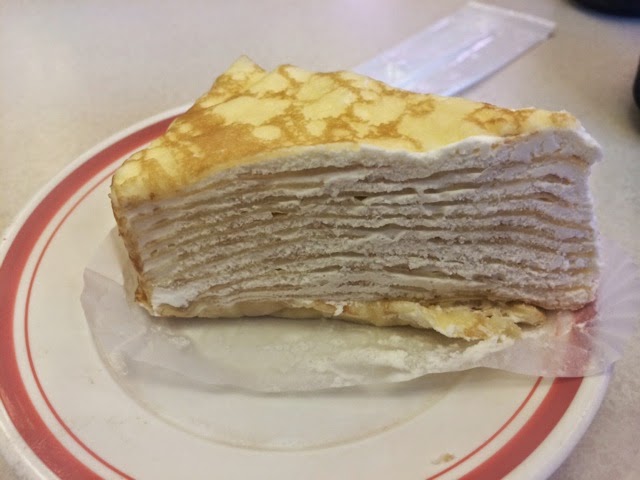 This, however, was. This is a crepe cake. 13 layers of crepe with real whipped cream in between each layer. We did not eat this with chopsticks. 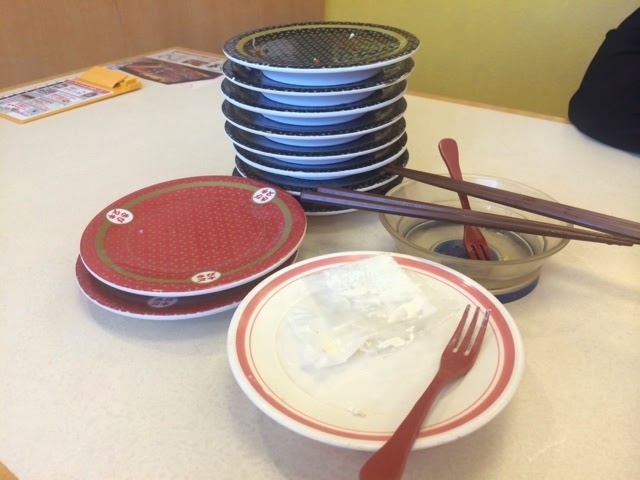 When we were close to full, we stacked the dishes, and the grand total for a custom sushi lunch for two people, including dessert?
$13.78.
Even better? My stomach is fine. So much better than when I woke up. As we drove home after a quick stop at the bakery/ice cream shop, I said, “I wonder if I felt so sick this morning because I didn’t eat enough yesterday.”
“I was thinking that I didn’t really feed you yesterday,” Deanne said.
And that’s just one little slice of what sucks about having two eating-related issues: I never know which one is screwing with me. Since I’m completely fine now, after all that sushi (including sashimi, which I’ve never ever tried ever) I’m thinking this morning was the hypoglycemia talking, which is great because I much prefer her to the IBS.
I leave a week from tomorrow, and in that time, we are planning another trip to Tokyo, Hello Kittyland, a bit of time at a nearby campsite, and a final excursion to the Daiso.
In other words, expect some photo dumps the the coming days.

3 thoughts on “Let Me Share Way Too Much About My Health. Oh, and Sushi, Finally.”