I knew when I finalized my trip to Japan I was going to spend time at a Disney park. And the plan all along was to go to the Magic Kingdom.

Last week as we planned our Disney excursion, I looked at the Magic a Kingdom website and realized I was only looking forward to a handful of rides. And the more I thought about it, the less I wanted to spend time and money for a handful of rides.
So I told Deanne we shouldn’t go, and she suggested I look at the website for Tokyo Disney Sea. I did, and it looked completely unique but still Disneyish, so we decided that would be a good use of our time.
Best choice ever.
Disney Sea incorporates the worlds of Pinocchio, Little Mermaid, Aladdin, Newsies, and Jules Verne. Each area has some unique rides, as well as different takes on Magic Kingdom favorites.
Like the “It’s a Small World” ride? Hit up Sinbad’s Voyage. A fan of Dumbo? Try Jasmine’s Flying Carpets. Enjoy Autotopia? You’ll love Aquatopia!
Our main consideration with the rides is that both Deanne and I have vertigo issues, so some rides were flat out bad ideas and not even considered.  Like the ride with the 360 loop. The ride that gave us the most fits, actually, was Aquatopia, because the small bumper boats automatically rotated forward and backward at a decent speed. It looked tame, but that was the roughest for us.
We picked the best day ever to go. We did not wait in any lines (except one–the Crush the turtle standup comedy show), and though humid, it wasn’t unbearably hot, and by 4 pm I was actually chilly. 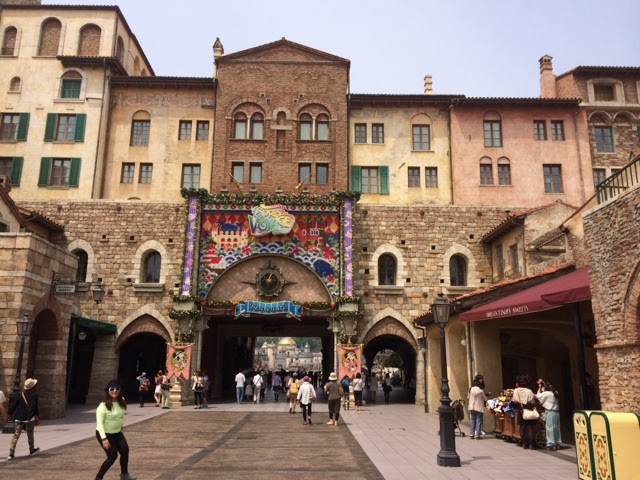 The walkway to the main part of the park. 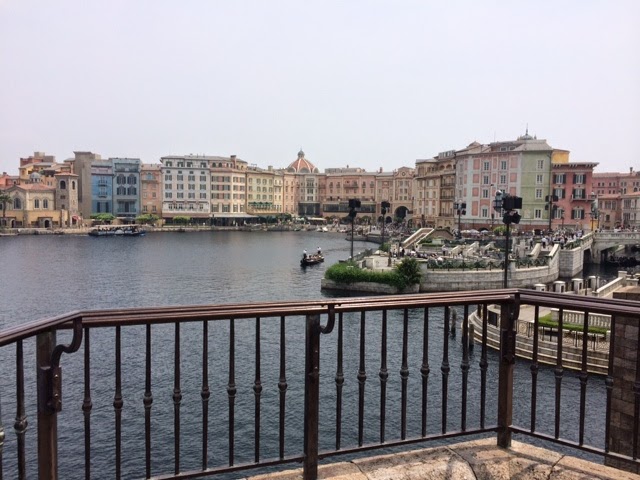 A view of the Mediterranean Harbor. So gorgeous. Everything was Italian, and my biggest regret about this section of the park is that I didn’t try the gelato. By the time we could have, I wasn’t hungry. 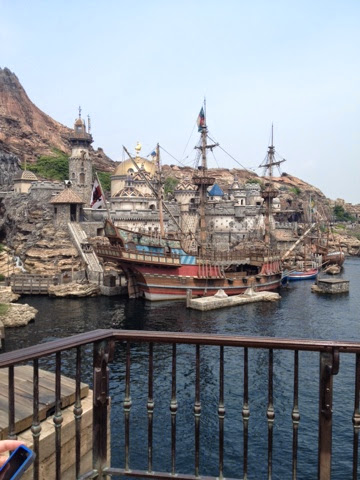 Another view of the Mediterranean. Fake, of course. 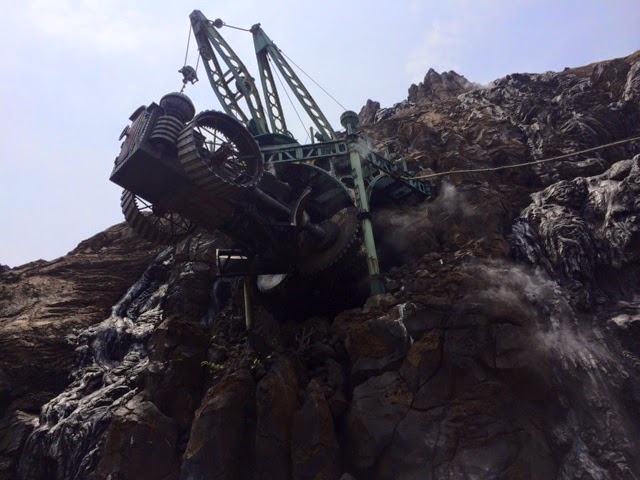 This is the machine that goes to the center of the earth! One of two major roller coasters in the park, this would be closest to Thunder Mountain. I was a little nervous, because I’m not a fan of roller coasters, but I enjoyed it! The drop was a tad terrifying, but what I liked most was that the ride wasn’t too long. Just the perfect balance of thrill and interesting decor. 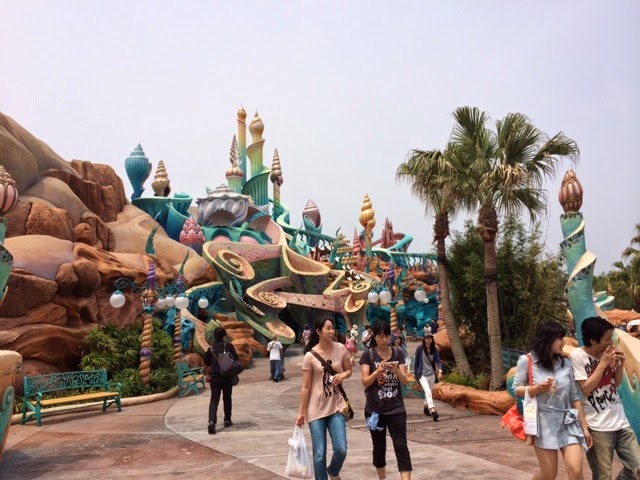 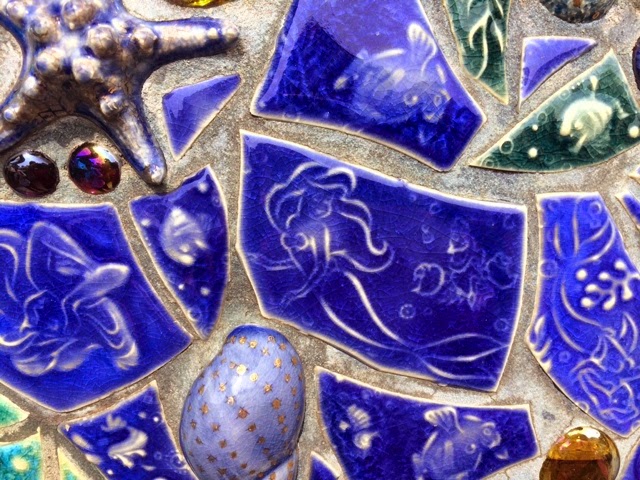 All day long I was floored by the detail of the decor. This is a close up of part of the pillars outside
Triton’s castle. 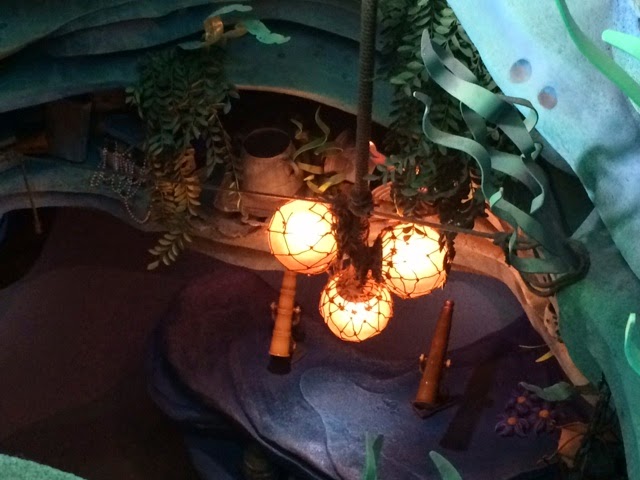 Ariel’s shelf of human goodies. I looked for a dingle hopper but did not see it. 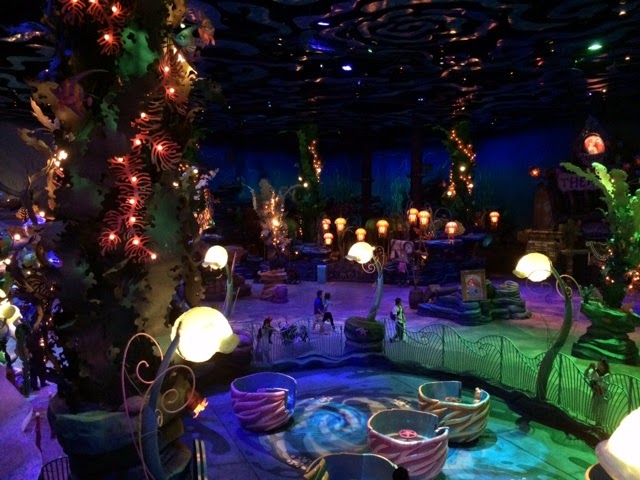 This was pretty cool. The inside of Triton’s castle is filled with all kinds of rides (see the teapots?) and places to explore. We spent half an hour in this space and loved it. 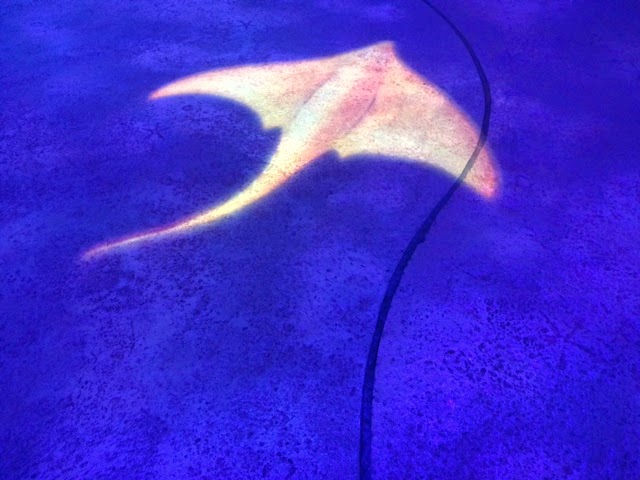 Watch out for that stingray! Not painted on the floor, but moved around via some kind of light from above. 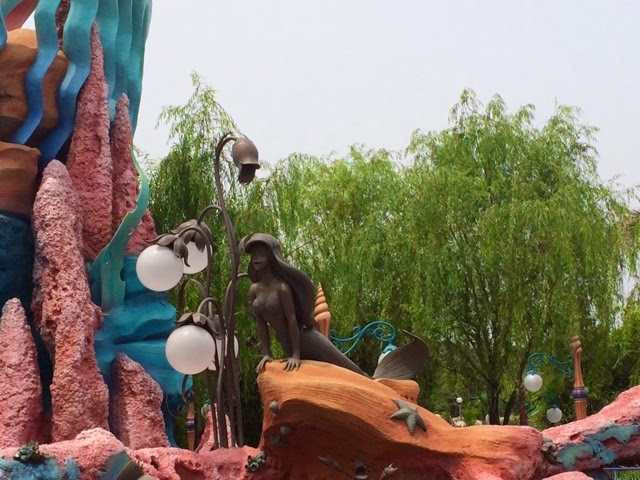 WISH I COULD BE…PART OF YOUR WORLD…. (My least favorite part of the movie) 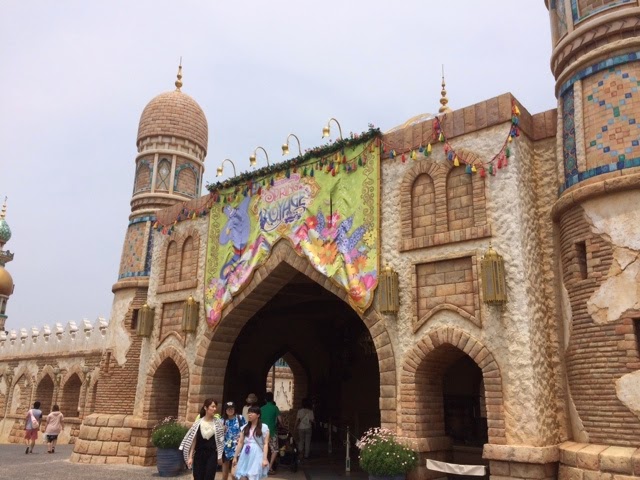 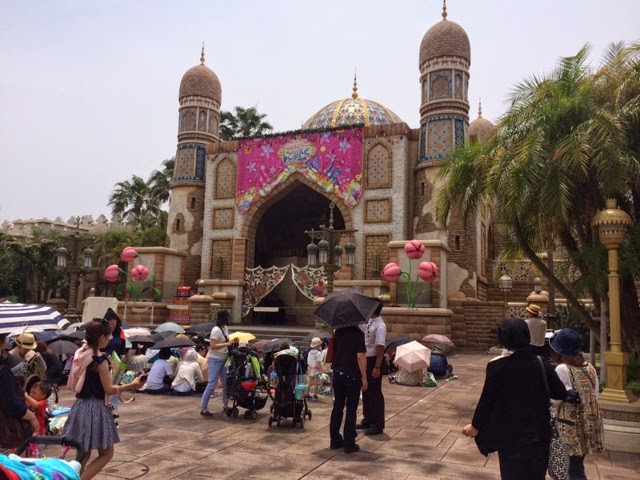 One of the stages for the different shows. We did not watch. In case you were wondering, it wasn’t raining, but it was sunny–that’s why you see the umbrellas. Shade. 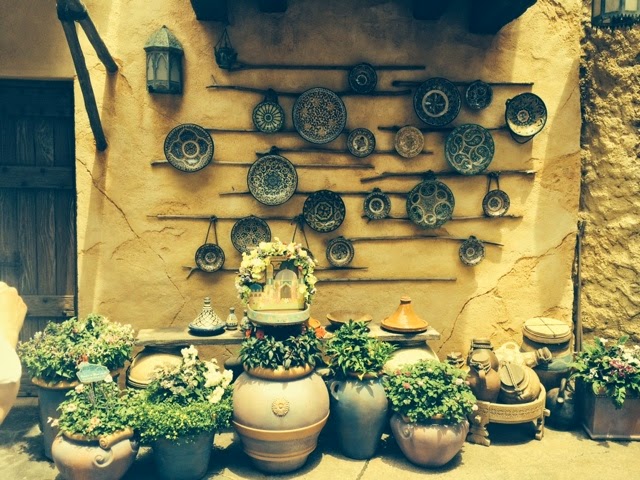 Again, details! I loved them!!! 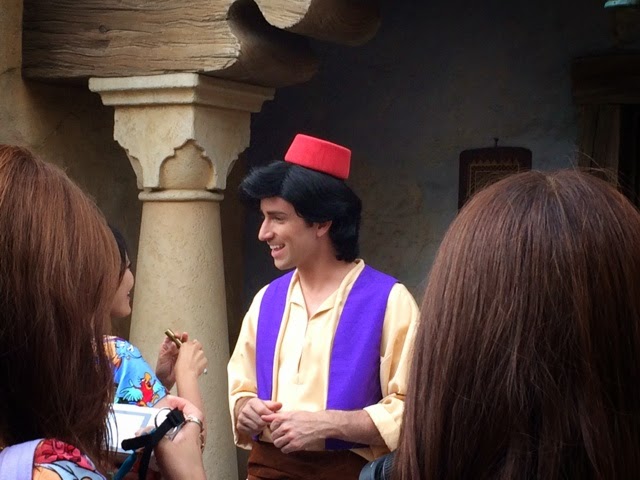 It’s Aladdin! As soon as I saw him, I thought he looked like my friend A.J., which is why I took the photo. 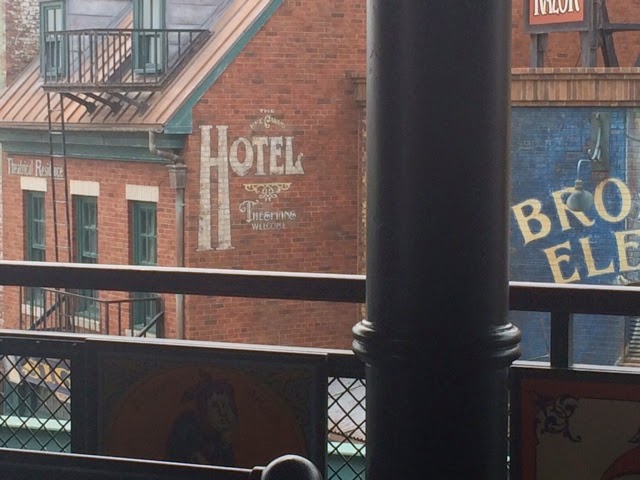 The ads on the buildings in the New York section were so great. I loved this one that said “Thespians welcome.” 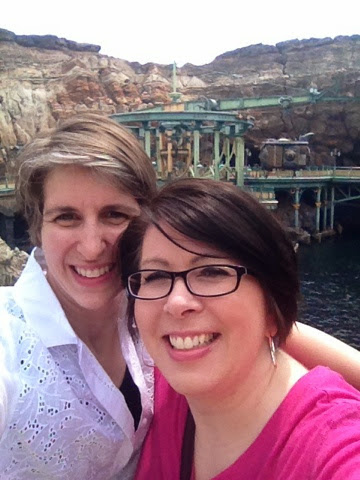 Rule #1 of Disney: take the selfie at the beginning of the day. In the background is the entrance to 20,000 Leagues Under a The Sea, which was quite cute. The entrance to the park has a giant globe. I took a photo of the Japan side.
It really was a perfect day until we tried to shop. I planned on dropping a couple hundred dollars on gifts and souvenirs, but I did not account for the fact that Japanese fashion is different…so different. The shirts were so loud and out of my comfort zone, and I realize now I should’ve taken photos to prove it, but just trust me. You would not want to see me in any of those shirts.
I was disappointed in the candy, too–it’s quite different from Magic Kingdom’s offerings. I did grab a gorgeous tin of rice crackers though. It’s made of the same fabric they make obi (kimono belts) out of, with a more Japanese design that incorporates Disney. And the rice crackers and yummy!
I was floored by the footwear I saw. Again, no pictures because I think it’s rude to take random pics of strangers, but I saw so many platform shoes and stiletto heels at Disney Sea, and every time I thought, “How?!? I’m in Skechers and DYING.”
Also, American men need to step up their boyfriend/husband game. Couples were easy to spot because of their matching apparel. Matching shirts, matching Mickey headbands, matching MINNIE headbands, and even MATCHING SHORTS. Deanne asked if we could buy matching shirts right when we got to the park and wear them all day, and I thought she was crazy. But that’s really a thing, and by the end of the day I kinda wished we had. I think the biggest group I saw was 7 girls, all wearing the exact same shirt.
So that’s the epic Disney post. We did not stay for fireworks because, well, I’m 40 and I’ve seen fireworks, and I’m going to be in Provo for the 4tjh of July, and they know how to do fireworks. Also, we had done everything we wanted to do by 6 pm, and I didn’t want to just hang around for 2 hours waiting for fireworks. So we left at 7 and were home by 8:30. 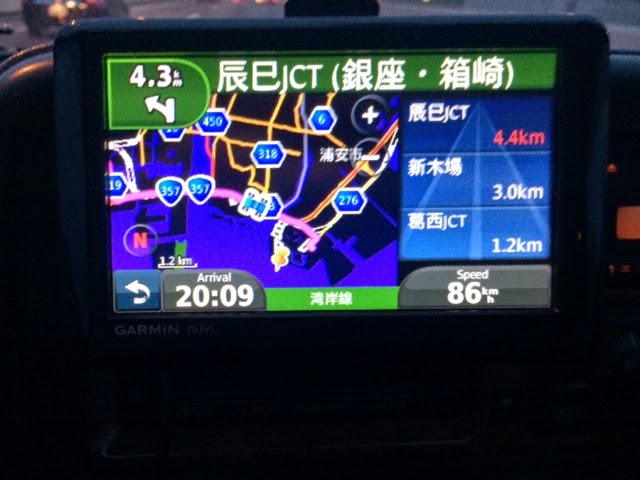 A much better trip home than when we left. Only a 20 minute delay.
We are taking the rest of the week easy, as next week will be packed. I can’t believe my time here is more than half gone.

ETA: I forgot the best part! At Disney Parks in Japan, you can bring in your own food and drinks. They even have places for families to eat the meals they pack in themselves. Deanne and I each had our own water bottles, so we brought those and just refilled them throughout the day. And the food prices?amazing. Lunch, dinner, a churro, some popcorn, a frozen treat and some caramels ran us less than $50. For both of us, not each of us. $50 total spent on food. I couldn’t believe it.