Friday night my sister took me and 14 of her other friends to a karaoke place not far from her home. I should’ve taken pictures but it was raining (it’s been raining for three straight days with no end in sight) and I still feel awkward taking photos anyway.

Again, go listen to “3×5” by. John Mayer for a better explanation of my aversion to nonstop photos.
This karaoke place looked like a Motel 6, except the color scheme was bright yellow and pink, and its mascot is a small kitty face (not much unlike Hello Kitty) holding a microphone.
The reason it looks like a Motel 6 is because the venue has 10 or so individual rooms for groups to sing in. So we all piled into the largest room they offered and sang for three hours.
I was a karaoke DJ in college as one of my many jobs, but even that did not prepare me for Japanese karaoke. The best part, hands down, is the music videos. In the states, all the karaoke I’ve ever done is facilitated by a black screen with words that scroll by. In Japan, the music is accompanied by story arcs, psychedelic images, and/or the most random action ever. More than one song featured women baking. Just in a kitchen, smiling, and baking.
I enjoyed just sitting back watching the videos, though I did get up and sing a couple of songs with my sister. I realized early into the whole experience that I’m much more introverted than I ever thought.
Saturday we went to a bakery called Chateraise. It is stocked with ice cream treats in addition to the bakery items, and everything I tried was delicious. As a lover of all things waffle, I was happy to see small waffles dipped in chocolate. I’ll be taking some of those home. 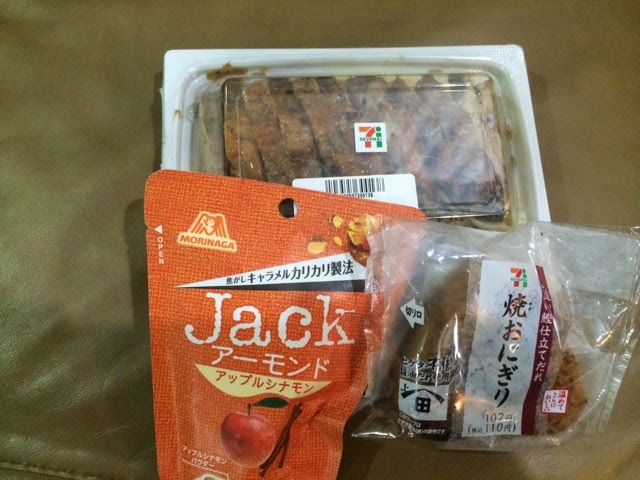 (This was my lunch earlier this week–amazing almonds, spicy chicken and noodles, and my new favorite, onigiri. All courtesy of the 7-11.)
I’m trying to be adventurous in my dining choices when we go out, so I also tried ice cream wrapped mochi, which is finely pounded rice. Its consistency is a bit chewy, so that took some getting used to, but it was definitely tasty. My favorite though, was a sweet bread with two different types of cream filling. Not Hostess creme filling, but it tasted like real, legit dairy-based cream.
Not much else to report–80% of the reason I’m here is to just be with my sister, so I don’t care what I see or don’t see. Like I told someone at church today: if my sister was at Minot, I’d spend a month there too.
That said, we are still going to try and make it to Tokyo Disney.